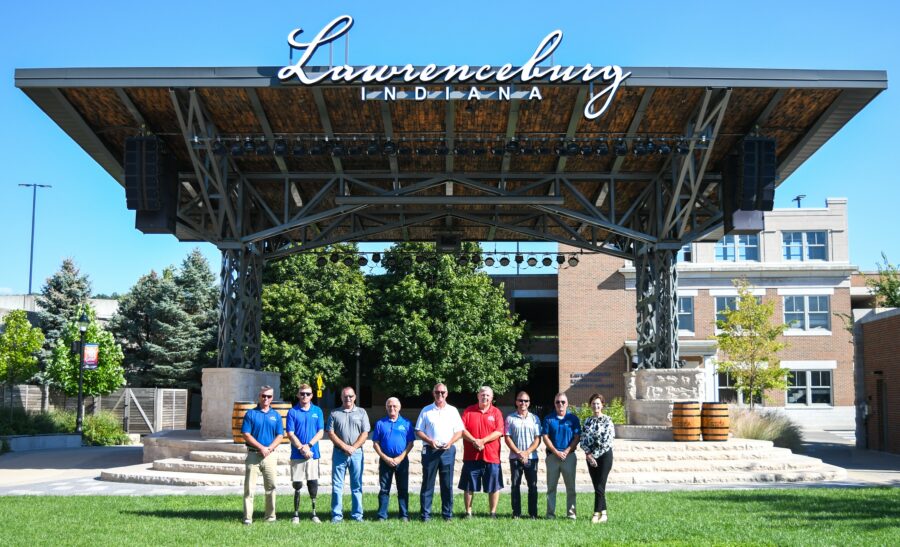 LAWRENCEBURG, IN – The International Downtown Association recognized the City of Lawrenceburg with the Downtown Achievement Award of Excellence for its resourceful approaches related to Lawrenceburg Civic Park. A jury of peer professionals reviewed, deliberated, and evaluated all entries in the 2021 Downtown Achievement Awards. The Award of Excellence acknowledges an excellent response to an urban place management challenge, demonstrating application of industry knowledge and exceeds the jury criteria.

Lawrenceburg Civic Park was among 12 qualified entries in the category of Planning, Design and Infrastructure which IDA identifies as one of the seven professional urban place management practice areas. This category features unique organizational approaches and projects in the areas of downtown master planning, streetscape improvements, sustainable infrastructure and wayfinding.

The development of the Lawrenceburg Civic Park is a response to the City’s 2014 Downtown Action Agenda. The plan recommended the development of a “Riverfront Cultural and Entertainment District” connecting the city’s entertainment offerings and local businesses on High and Walnut Streets into a cohesive walkable district.

Lawrenceburg Civic Park replaces 1.5 acres of formerly underutilized surface parking with an urban park and has already been a catalyst for growth and development within the downtown. Since the park’s opening in June of 2019 thru 2021, attendance at Music on the River has soared, the Lawrenceburg Summer Event Series including the Whiskey City Challenge, Whiskey City Summer Fest and the popular Lawrenceburg Fall Music Fest thrive at the Civic Park as well.  The Civic Park is regularly programmed with community activities including a farmer’s market, mobile library, Shakespeare performances, movies, and fitness classes.  In 2020, over 88 of 100 community events and programs were able to continue with combined support from the City of Lawrenceburg and Lawrenceburg Main Street with the majority of events taking place in Lawrenceburg Civic Park.

Within the “entertainment district” surrounding the park, several new businesses have opened including Proof 124 Table & Tavern Restaurant, Funny Farm Coffee Company, and Parkside Market & Bakery. The 150-unit Whiskey River apartment development will open in summer 2022. Lawrenceburg Civic Park has and continues to successfully draw the community of Lawrenceburg toward the Ohio River and celebrates the City’s rich “river town” history.

Washington, DC-based IDA is the premier organization for urban place professionals who are shaping and activating dynamic city center districts.

A thriving local economy is key to the strength of a sustainable business environment. Business retention and attraction principles are needed to foster a culture of entrepreneurship and innovation. The City of Lawrenceburg, Lawrenceburg Redevelopment Commission (LRC) and Lawrenceburg Main Street (LMS) continue to coordinate and invest in supportable economic development opportunities and quality of life environments. Many exciting economic initiatives are unfolding with the City of Lawrenceburg laser focused as a “City on the Rise.”

About City of Lawrenceburg

The City of Lawrenceburg, Indiana is a community dedicated to improving the lives of its residents with a focus on education, economic development, and quality of life. Lawrenceburg enjoys 21st century comfort and resources such as excellent schools, medical facilities, local industry, small-to-large business, employment opportunities, shopping, world-class entertainment, sports and recreation, and neighborhoods ranging from in-town to rural communities where a family can grow and thrive. The City of Lawrenceburg presents itself as one of the prime locations for prosperous growth in America’s Midwest, offering the most desirable resources in an environment that presents a balanced presence of residential, agricultural, corporate and industrial development, all centered within the web of one of the country’s most traveled interstate transportation networks.  For more information visit www.THINKLAWRENCEBURG.com

The International Downtown Association is the premier organization for urban place professionals who are shaping and activating dynamic city center districts. Our members are city builders and downtown champions who bring urban centers to life, bridging the gap between the public and private sectors. We represent an industry of more than 2,500 place management organizations, employing 100,000 people throughout North America and growing rapidly around the world. Founded in 1954, IDA is a resource center for ideas and innovative best practices in urban place management. For more information, visit downtown.org.